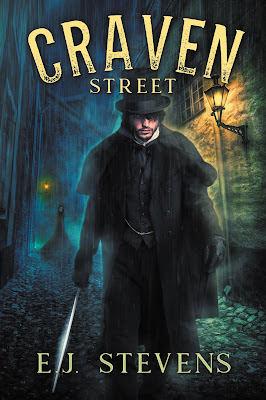 In this spellbinding novella, E.J. Stevens weaves a tale of murder, necromancy, and demonic possession that brings together characters from her Whitechapel Paranormal Society Victorian horror series and award-winning Ivy Granger Psychic Detective urban fantasy series on the fog-shrouded cobblestones of 36 Craven Street.

The discovery of bricked up skeletal remains at 36 Craven Street point to something more diabolical than an illegal anatomy school.  The tool marks on the bones, arcane sigils of great power, indicate more than mere butchery, more than enlightened experimentation.  The signs, omens, and portents support the crown's greatest fears.  A great evil is being unleashed upon the gaslit streets of London, a blood-drenched shadow reaching skeletal fingers beyond the slums of Whitechapel.

We must stamp out this demonic plague for the sake of our Queen, our Country, and our immortal souls. - Cora Drummond, Whitechapel Paranormal Society

Collecting human souls is a thankless job, nearly as tedious as acting as solicitor to the fae.  But when the demon Forneus enters an opium den searching for men eager to trade their souls for the ill-smelling weed, he stumbles on a plot so devious, so heinous, he's jealous that he hadn't thought of it himself.

There's nothing like a maniacal plot to unleash Hell on earth to break the boredom of immortality.  - Forneus, Grand Marquis of Hell